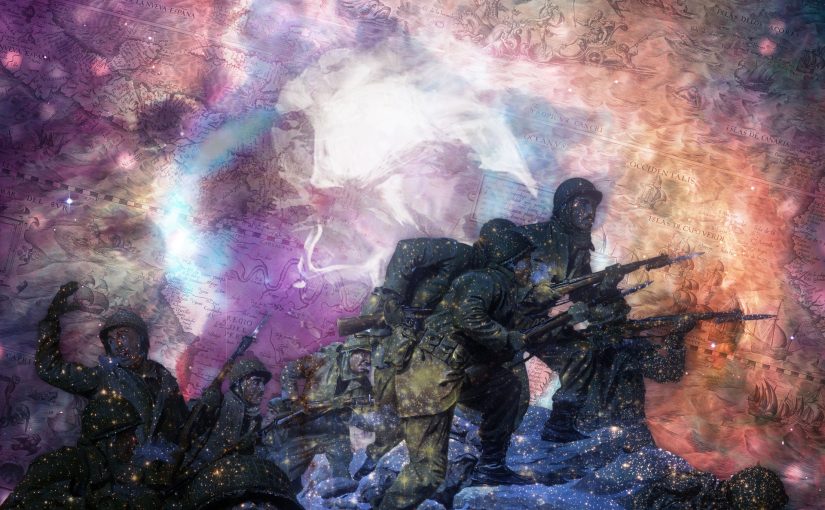 There are numerous interpretations of seeing a battle in a dream. Seeing that two or more nations are in a battle in your dream signifies that there will be a viral or infectious disease and people will suffer from these maladies.

Seeing a battle of people against the leader of the state or revolt and rebellion indicates that there will be abundance and wealth as a result of the increase in the economy and decrease of prices in that county.

Seeing people fighting a battle with each other or in a civil war contrarily mean that there will be peace, profit and wealth in this country.  If you see yourself battling against your enemy in your dream, that means you will be a good son or daughter in your family.

Seeing A Battlefield In Your Dream

Seeing a burning and devastated battlefield in a dream is not good. It is a sign of bad news and sadness.

Seeing  a Battle Cannon In Your Dream

Going For Battle In Your Dream

This dream means confronting people who are trying to fight you. You are going to defend yourself in order to get rid of the unpleasant ones, to defeat them by breaking the games of the enemies. The person who goes to the war becomes more courageous despite he was a calm person. This person seeks an opportunity to show his power.  This dream also means that you are working in a business area where there is a serious competition. You will be developing a strategy to take part in the market, cooperating with others to expand the existing business, and acting cunningly and wisely.

Battling In A Dream

The person who had seen this dream is someone who works hard and it is interpreted that when he earns his money, he will not lose it and will fight to the end of his life with all kinds of unfairness. Battling also refers to your strength and courage to defend yourself from bad people around you. Acting fearlessly is showing off your strength and taking over the power.

Seeing Battling Troops In Your Dream

This dream points out a difficult and challenging situation and indicates that it must be right for people to remain patient and to act at the right time to subjugate their rivals. They should not be submissive to the competitors and to the strong people in the same sector for business.

Getting Wounded In Battlefield In Your Dream

The dream tells that the person who had this dream will have developments in a way that will come with determination. But there will be incidents that are apart from what he has calculated.  And that disappointment and low morale will also be a subject of discussion. to return empty-handed from a path that has been opened, to come in with false news, and to live a boredom. It means catching the lies of someone who is involved in special relationships, being exposed to unpleasant behaviour and having controversial days.

Dying In Battlefield In Your Dream

The dream, which is news of an end and a divorce, also gives the news of the new door to be opened. This dream says that you will be happy again with news that you will receive in a point where you lose all your hope and that you will feel good about it. With the support of relatives, you will continue from where you have left.

Battling Against Your Enemy In A Dream

Also in real life, this dream is a sign of challenging, hard days that will bring you, enemies and bad people. This dream is telling that you should be prepared for some plots and tricks, especially in business life, also it points out that there is a good reason to take your steps with strategic and confidential plans. If you can do all this, you can be very successful in your business and social life.

Seeing Yourself Defeated In Battle In Your Dream

This dream means you will give away something that you want to hide and you will continue to live with keeping one eye looking over your shoulder. People who are defeated may suffer from financial hardship and depression. It also underlines the need for avoiding decisions to be made during this period when self-confidence is lost.

Victory In A Battle In You Dream

This dream refers to a phase in which you will be fortunate in every matter, the increase in income and the most of the problems are solved

Becoming A Battle Prisoner In Your Dream

This dream refers to a person who will have to struggle with a disease. This person will learn who is a friend and who is enemy in this period and will plan to take care of it after healing. Sometimes this dream signifies a long-standing calmness and serenity. That can also be called as recession period of your life. This period is a sign of slowing down in business and decrease of your income.

Seeing A Battle Is Breaking Out In Your Dream

The dream that gives rise to various troubles and sorrows reveals that some negative developments both in the life of the dream owner and in the country will create despair in the people. Break out of a battle refers to complicated things and confrontation with your enemy. Whereas joining to an army refers to fighting for what you believe.

Being In The Middle Of A Battle In Your Dream

This dream is interpreted as a sign of being in the middle of a discussion in your social life and being unable to choose a side. It means that you may hear endless complains from your family members. It also refers to some misfortune in your business life which can cripple your future plans.

Seeing A Battleship In Your Dream

It means collecting and taking over the power and strength. To enlarge the field of business, to block the enemies and competitors, to find a chance to break their plans, you will try to become stronger in life. It is interpreted to be doing great and wise things. As you are moving beyond your limits, you will be among people who will not be forgotten in the future.

Seeing People Are Dying In Battle In Your Dream

For a person who struggles for a purpose and works by attaching his life to his goal to reach his goal, this dream points out that he will succeed at the end and will get the things he wants and that he will take back the things taken from him.  If he will become more hopeful for the future and eliminates any kind of bad behaviour, this will add more to his success.

Watching A Battle Movie In Your Dream

It indicates that the owner of the dream who prevails the danger of the conditions will weaken the influence of his opponents on himself and will take some measures in order to prevent enemies from getting closer. It refers to developing a strategy and to acting wisely and sensing every negativity and acting accordingly.

Playing Battle Games In Your Dream

This dream is interpreted as a sign of small and friendly rivalry. You will play mind games with your rivals and you will conduct your business without damaging anyone around you, including your rivals. But when it comes to serious threats, this dream means that you will decisively defeat your enemies.

Seeing minors playing battle games in your dream refers to financial and social hardship that your country or society may suffer.  There may be a loss of balance in economy or society. It also means having some troubles but eventually overcoming them.

Fleeing From Battlefield In Your Dream

Seeing this dream means being in haste and losing accessibility due to insecurity, leaving the threads at the hands of others at work, and trying to get rid of all responsibility by throwing it on someone else. It means that you do not counteract the injustices that you have been through and shows that you continue to your life without any lessons from the negative situations that have happened to him.

Seeing the weapons used in battle is interpreted as being well-equipped and possessing the power to abstain from all kinds of risks. You will be living a risk-free life according to your plans. But you will not hesitate the silence some people who will try to slander you.

Psychological Interpretation Of Battle In Your Dream

It means that you are someone who follows his ambitions. You will not quit when hard days find you and you will always try to overcome your fears and troubles. As you live your life with courage, you will make efforts to rectify the bad behaviours of people around you.